Entergy, which operates Indian Point, has been embroiled in a years long fight for relicensing, with activists and the Governor calling for it to be closed, citing the safety risk of having an aging nuclear plant only 35 miles north of New York City. More recently, activists have been calling attention to the massive Spectra Energy gas pipeline being constructed adjacent to the plant. Courtney Williams, a resident of Peekskill and Vice President of SEnRG asked, “While Governor Cuomo cited the existing gas pipelines as posing a risk to the plant when he called for its closure, he has remained silent on the issue of the new pipeline’s construction. Similarly, Senator Schumer has written to the Federal Energy Regulatory Commission calling for more safety oversight of the gas pipeline project. This new pipeline will be a risk whether or not Indian Point remains in operation and their recent statements have ignored this emerging risk to plant safety.” Experts contend that even if the plant is shut down, the blast radius from a pipeline explosion could encompass spent fuel rods and other radioactive material from the plant.

Leading nuclear safety and pipeline safety experts have clearly explained that Entergy’s risk assessment dramatically underestimated the risk of siting this pipeline adjacent to Indian Point; the Nuclear Regulatory Commission (NRC) is using this assessment in its analysis of the plant. These experts say that in the event of a pipeline rupture, the most likely scenario would be a full system and back-up system failure. Indian Point personnel will NOT be able to shut off the flow of gas in the AIM pipeline because the shutoff valves are operated remotely at Spectra’s “Computerized Leak Detection System” in Houston, Texas. Rick Kuprewicz, a pipeline safety expert with Accufacts has stated: “An independent analysis should reflect the true dynamics of a high pressure gas transmission pipeline rupture next to the (nuclear) plant, not dismiss such an event as a low probability given its severe consequences.” 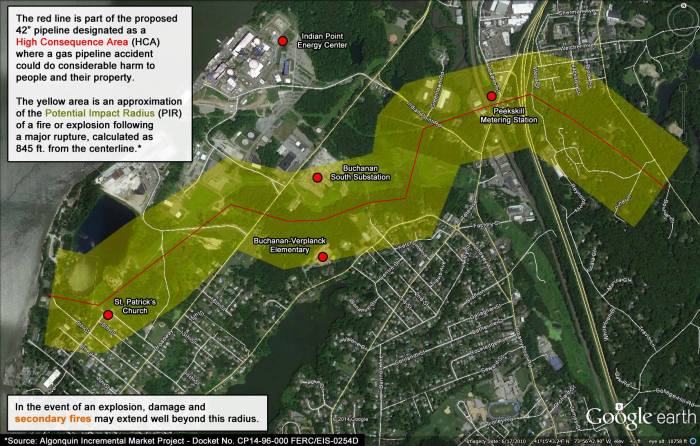 Numerous local governments and elected officials have called on FERC and the NRC to conduct an independent risk assessment of the pipeline near Indian Point. Nancy Vann, who had a section of her property in Cortlandt taken by Spectra via eminent domain, said: “Spectra claims to be concerned about my safety—but what about the safety of 20 million people at risk from a pipeline accident at Indian Point?”

According to Linda Snider, one of the Montrose 9 arrested for blocking a Spectra construction yard on November 9, “The pipelines have been exploding, leaking, and rupturing in many areas of the country, causing serious damage as well as deaths. In May, 2015, a Spectra pipeline burst under the Arkansas River in Little Rock. It wasn’t detected by Spectra’s computerized leak detection system in Texas. The Coast Guard notified them.”

Carl Weimer, of Pipeline Safety Trust, says: “It has been clear for years that these computerized leak-detection systems don’t work.”

In light of Indian Point’s continuing safety breaches, it is clear that not only must the plant be shut down immediately, the construction of the AIM high pressure, toxic, fracked gas pipeline must also stop now. As elected officials call for investigations into the safety of Indian Point, they must take into account this new and emerging threat.